Depression and suicide are strongly linked, with up to 10-15% of patients with severe and recurring depression eventually dying by suicide. Between 40% and 70% of depressed patients have suicidal thoughts. Indicators for acute suicide risk include pressing suicidal thoughts, hopelessness and feelings of guilt, a strong desire for action, and direct and indirect announcements of suicide.

Suicidal thoughts and acts can be uncomfortable to address. However, it is particularly important in adolescence. Many times, adolescents harm themselves (for example, engaging in self-cutting) in order to alleviate psychological pain and not necessarily to end their lives. However, even “non-suicidal” self-injury confers increased risk of further self-harm and suicide. It is important to understand what their intentions were in harming themselves. If a teacher feels it is useful, and the youth seems to be willing to disclose their thoughts, a warm and open atmosphere can be created.

If you have the feeling that a youth was seriously thinking about harming themselves, it is best to directly address this in order to decide whether or not to refer them to urgent medical assessment. Sometimes, it is not easy to differentiate when there is an urgent need for help. Frequently, youth react to frustration with despair and impulsively harm themselves. This does not necessarily mean that there is an imminent danger. However, the risk increases extensively if the idea becomes very pressing and concrete plans are made. Therefore, it is very important to try to get a more precise idea of what the actual suicidal tendencies are.

The following questions can help you to evaluate the seriousness of the suicidal risk (see box): 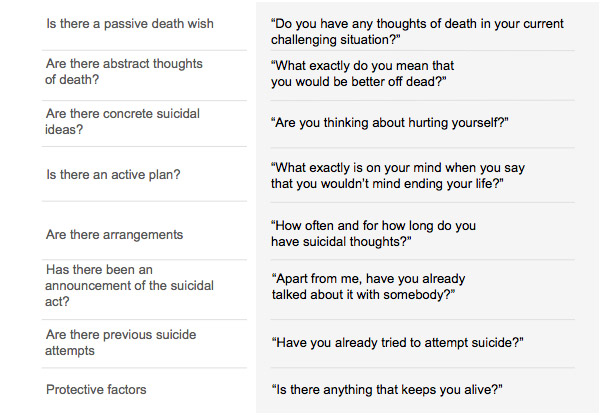 If you become involved in a situation with a person with acute suicidal tendencies, the following thoughts and steps might help you with the situation. They also apply if you have the feeling that, after exploring suicidal tendencies in a personal talk, the suicidal thoughts are very concrete and that the person talking to you is in danger.

In the case where a teacher feels that someone is in immediate danger to harm him/herself or others, and this person is so despondent that they will not consider your thoughts and suggestions to get external help, the question of compulsory hospitalisation might arise.

If a youth has a distorted view on his personal situation because of depression and sees suicide as the only escape from their unbearable situation, a teacher cannot simply accept this view and let the adolescent go. The young person is driven by depression and not free will.

The teacher has to provide help by calling the family, and referring this adolescent to urgent medical assessment, meaning that a call should be made to 999 or 112 to get the patient emergency medical care or to engage with the police. These professionals have to decide whether the patient has to be taken to the psychiatric ward even against his will or the family’s.