What are the subtypes of depression?

Though common, there are different types of depression, which can take different courses. Signs and symptoms vary in number, timing, severity, and persistence, but on the whole they are quite similar. As different subtypes of depression may require different treatments, your doctor will want to identify which type is affecting you. There are also differences in how individuals experience depression and express symptoms in accordance with age, gender, and culture.

Many names have been used to describe different forms of depression: neurotic, reactive or minor depression are common clinical names and are said to be of psychological nature and treatable mainly through psychotherapy. On the other hand, somatic and psychotic depression are associated with chemical imbalances and are medically treatable. These are terms mainly used by mental health professionals.

Research has consistently shown that depression is a mood or affective disorder that occurs in phases. This means that periods of normal mood alternate with depressive episodes. Sometimes, instead of a depressive phase, phases of mood euphoria (very high mood), irritability and agitation, called mania or hypomania, may occur. Therefore, unipolar depression is said to be present when there are no phases of mania or hypomania in the clinical history and bipolar depression is said to be present when such phases occurred in the past.

The most common and typical form of depression is the depressive episode. A single episode occurs over weeks to years, displaying a combination of symptoms but always lasting more than 2 weeks. Single depressive episodes are described as unipolar.  Roughly one third of affected people experience only one episode, or ‘phase’, in their life. However, if a person doesn’t receive appropriate treatment for their depression, there is a risk of recurrent depressive episodes occurring in the future. Episodes of depression are always more or less disabling. 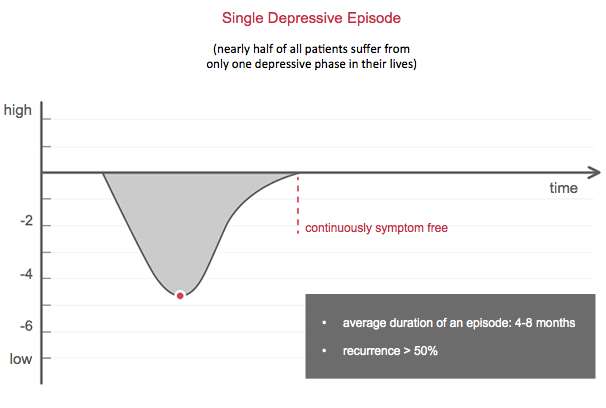 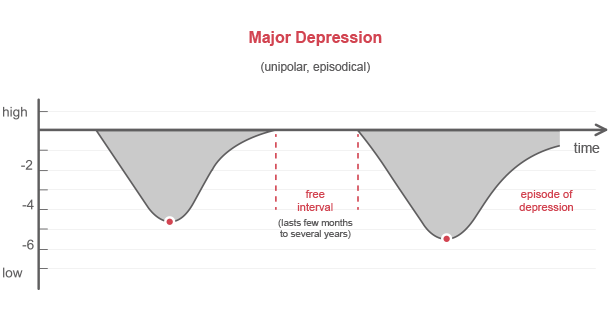 Dysthymia is characterised by milder and less distinct symptoms than a depressive episode or recurrent depression. However, the disorder is persistent, with symptoms lasting much longer, at least 2 years, sometimes decades, which is why this is also called ‘chronic depression’. The disorder is unipolar and affects functioning but is less incapacitating. People suffering from this type of depression sometimes get acutely more ill and collapse into major depression; having both diagnoses is called dual depression.

This type of depression occurs in bipolar disorder, previously named manic-depressive disorder, and is less common than unipolar depression. It involves a switch between depressive phases, normal mood phases, and the so-called “manic phases”. Manic phases are characterized by excessive high mood, connected with hyperactivity, restlessness and reduced need for sleep.

Mania affects thinking, judgment, and social behaviour causing serious problems and difficulties. Indiscriminate or unsafe sexual practices or unwise business or financial decisions may be made when an individual is in a manic phase. Following a manic episode, affected people often experience depression.

The best way to describe this alternating “turmoil of emotions” is “going from being on top of the world to the depths of despair”.

The symptoms of the phases of depression in bipolar disorder are sometimes difficult to distinguish from unipolar depression. 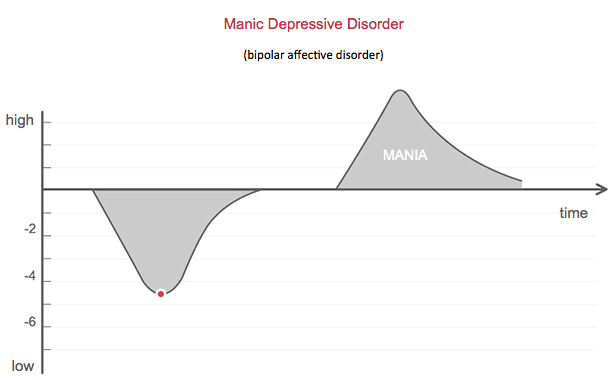 More similar to recurrent depressive disorder than to bipolar disorder, people affected by Type II bipolar depression at first sight only present with sad mood phases. This is a syndrome in which the affected person has repeated depressive episodes punctuated by what is called hypomania, a moderate euphoric state much milder than mania that the person and the family can confuse with normal mood or joy.

A special form of depressive episode is psychotic or delusional depression. Psychosis involves seeing or hearing things that are not there (hallucinations) and/or having false ideas or beliefs (delusions). Affected people can develop false beliefs such as putting heavy guilt on themselves (delusion of guilt), financial ruin (delusion of poverty) or having an incurable severe disease (hypochondriac delusion) despite all evidence to the contrary. People with delusional depression almost always need inpatient psychiatric health care. Psychotic episodes can be unipolar or bipolar in nature.

This type of depression is said to be similar to atypical depression and occurs seasonally during climate changes such as fall or winter. Usually, when the depression season phase ends, people get well and regain normal functioning again.

This is a mild and minor form of depression that can compromise functioning, affects mostly young people and is characterised by short periods of depressed or mixed mood, typically lasting less than 2 weeks.