More about pharmacotherapy for depression

Pharmacotherapy for depression should consist of acute therapy up until the best clinical response or remission is achieved (usually 6-12 weeks) and continuation therapy for a further six months to prevent relapse. Sometimes, maintenance therapy will continue for months or years in case of recurrent or persistent disorders. Rates of relapse are about twice as high when antidepressant medication is discontinued before the end of the continuation phase so adherence is important, even if early improvement is achieved. 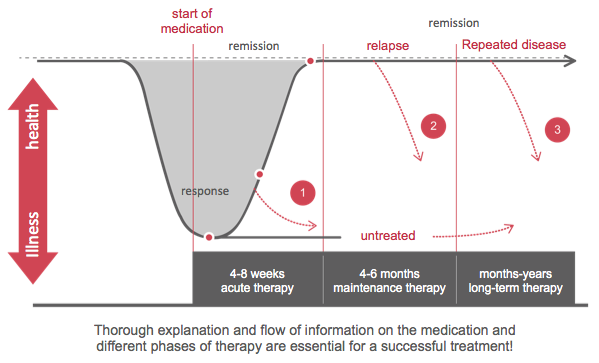 There are different types of medication used in depression treatment. For the choice of the medication, several factors need to be considered by the doctor: e.g. predominant symptoms, previous experience, preference of the patient, as well as side effects. In this context, the distinction between unipolar or bipolar depression is crucial. Usually, this step takes place before you become involved as a pharmacist. The most common groups of medication commonly associated with depression treatment and their characteristics are:

The exact neurochemical dysfunction of depression is not known. Antidepressants appear to increase the availability of the neurotransmitters serotonin and noradrenalin in the synaptic cleft in some parts of the brain. However, at the same time, recent pre-clinical studies show that antidepressants consistently reduce the activity of neurons in the locus coeruleus in the brain stem where the noradrenergic neurons are located. Antidepressants also increase the availability of BDNF, a neurotrophin involved in neurogenesis and neuroplasticity.

Common side effects of antidepressants

Like all drugs, antidepressants have side effects. Every individual reacts differently and not every drug has the same side effects to the same degree. Many times patients experience secondary effects in the first week of antidepressant treatment: agitation or drowsiness, dry mouth, nausea, or ‘feeling peculiar’. Many of the side effects can be managed with simple diet and physical activity adjustments.

The desired antidepressant effect normally arises after two to six weeks of treatment, but the side effects often occur right from the beginning of the treatment. This can be very frustrating and may reduce adherence. As a pharmacist, you can let the patient know that this might happen and that such symptoms will subside. It is important to direct them not to discontinue the intake of the medication and to discuss their concerns with the physician in charge of treatment.